As I wrote this post, Wishetwurra Farm was basking in sunlight. At midday, the temperature was 56°F (13.5°C). Winter this year has so far been brief cold snaps sandwiched in between periods of above freezing or merely frosty temperatures. The earth is not frozen at all. But wait! This being New England, there’s a winter storm and blizzard warning up for tomorrow and tomorrow night. Eight to twelve inches of snow are forecast, and when the north and northwest winds blast in after the storm, low temperatures of 15°F (-9.5°C) are predicted. We’re going to have to scurry to get the snow removed before it turns to ice. The longer term forecast lifts us back out of the deep freeze and returns us to seesawing above and below the freezing point. A screenshot of our “ten day” is below.

An old joke around here is “What do you call the first six months on Martha’s Vineyard?”

The last few months have been wet, and we’re at last “catching up” on our rainfall deficit. The lack of frost or frozen ground means that the rain we’re getting is going straight into the ground and building up the water table. That’s good. We’ve been in an increasing state of drought these last few years. Only Nantucket has escaped the dryness. In the last week or so, the Vineyard has been moved from the “moderate drought” to the merely “abnormally dry” classification. Here’s the latest map. Red is really dry, white is “no problem”.

Outside, harbingers of spring are here. The snowdrops have been in bloom for weeks now. 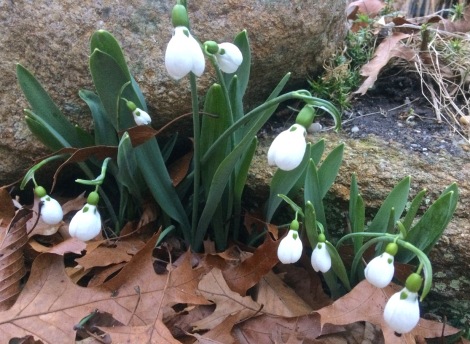 The first snowdrops at Wishetwurra Farm

The myrtle never stopped blooming. Daffodil shoots are breaking ground. The seed order has been sent, and the seeds, packets of promise, have come.  The starting mixes are ready, and the first batch of early plantings has begun. In old window boxes, leek and onion seeds nestle in growing medium. Two or three weeks from now, their first green threads should appear.

I resolve to bring more organic material to the garden. In 2016, Wishetwurra Farm welcomed 31 loads of horse manure, 5 loads of seaweed, and 3 loads of hay. It’s hoping to welcome even more in 2017. The more I garden, the plainer it becomes that gardening is soil building. Soil building is the process of adding organic material, as much of it as you can haul. If your soil is good and you provide sufficient water,the plant-growing part of the operation almost takes care of itself.

Out in the greenhouse, seeds for greens, spinach and mesclun, are in the ground. There are two more window boxes out there, one sown with milkweeds, the other with parsleys. The old growing year is over and the new one is begun. Every year is a new start. I’m going to try growing a little patch of rice this year.

First sowings in the little greenhouse.

Gardening isn’t just a burst of activity in the warm six months of the year. Gardening keeps going year round. In the good weather of late we got in another round of cleanup. There’s only a dozen or so loads of garden “trash” left to move to the burn pile. The pile will be torched sometime in March. (The real March, not one of those other Marches.)

We’ve been gathering seaweed lately, and this afternoon I hope to get a load or two of manure to dress the fruit trees with. The eelgrass (seaweed) gathered last week waits in little heaps by each tree, ready to cover the manure, once it’s laid down. Eelgrass is mulch of the finest kind. It keeps leeks ready all winter long. 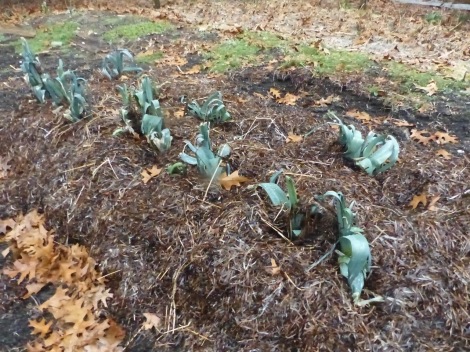 Leeks in eelgrass. We’ve got to make and eat some potato-leek soup, and soon!

Looking around at ground level, there’s not much to see. But underneath the surface, roots grow when it’s not freezing. Garlic and daffodil, strawberry and asparagus, are all getting ready for the season to come.

We’ll end with a panoramic view from the nosebleed heights of the Goat Barn roof.

Postscript: Two days later, winter has arrived for a visit.

The temperature was about 16°F as the sun rose.