I’d already had a full day of miles of dogwalking and eelgrass and manure collecting and forking and shoveling and wheelbarrowing and spreading, and breadmaking and preparation for coming weather. 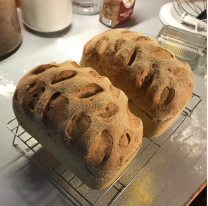 Then a daughter called in late afternoon to see if grandpa might not want to go for for a walk with her and two grandsons, up at Squibnocket, where she had not been yet this year..

What’s a grandpa to do?

Lucky is the man whose daughter will help him shovel that last load of manure from the truck and help spread it around the garden. Chore done, off we went, to Squibnocket, to see the new causeway and earthworks and to walk on the shore. As we stepped from the car and looked south, clouds were advancing.

The clouds were coming quickly, for clouds. 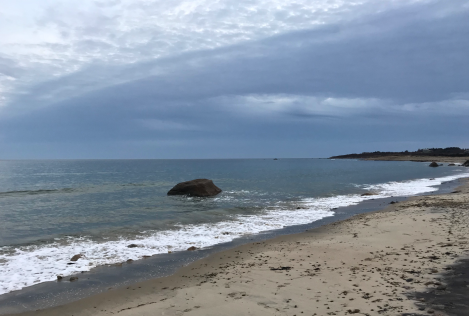 There was a distinct boundary. 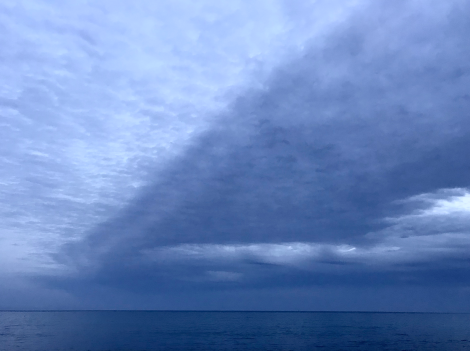 The wind was gentle, from the south, and warm.

We dawdled along, threw rocks, poked with sticks, found things to be interested in, and admired the soon-to-be-obscured almost-full moon.

The cliffs here erode steadily, more and more with each passing year. The edge at the top is a constantly changing silhouette of what is about to be lost to the sea. Here and there are layers of shell, old middens from pre-“contact” clambakes of the First People.

We walked as far as the start of Stonewall Beach, which is nothing but rocks and rubble.

When wind and tide and waves are high here, waves constantly crash — in the slosh of the surf stones smash stones, marine mixmaster style.

But no storm today.

It’s time to head back to the car, to go home for supper and rest.

On the inshore pond, a decad of swans and a duad of dimly visible geese.

And a bevy of swans.