I, the photographer, was trailing behind the rest of the family as they headed off to find the flamingos. We passed by the snow monkeys’ enclosure. They were fascinating. I dallied for a quick dozen or so photos, and hurried along to catch up. Seeing what I’d seen would just have to wait until later, when my hastily shot slices of frozen time could be thawed and prepared and digested at better leisure.

A monkey haiku from the Tokyo zoo.

Animals in cages and enclosures can make me sad.

But here were these amazing creatures…

No primate, other than Homo sapiens, lives farther north than these do.

They groom each other.

I do love going to the zoo.

And I don’t love going to the zoo. 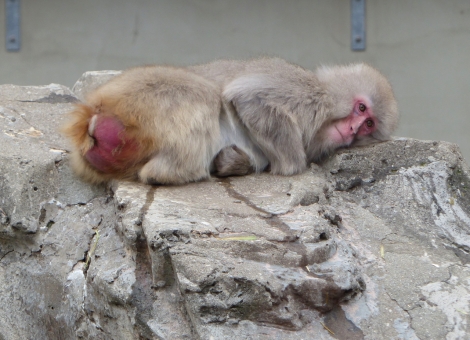 What would you do.

If you were kept in a zoo?