Our trip to see the Kamakura Buddha involved half-hour walks on each end, with three trains and two transfers in the middle. When we arrived, there was no doubt in what direction we could go. Three quarters of more of the passengers headed off in a stream, headed to the right and then up a sloping shopping street full of eateries and souvenir shops. There were more foreigners in the mix than we’d seen almost anywhere else we’d been so far. We figured they knew something we didn’t, so we went, too.

One of our missions was to find for a daughter a particular item at a particular store. Our instructions were: “It’s a *** store, on the right, as you get near the temple.” We had a photo of the item. Our first couple of tries ended up being @@@ stores and not *** stores, but each time, with a smile and a pointing hand, we were directed farther up the street. (Not to mention that C heard a siren song coming from a lovely clothing boutique….)

Eventually we found the *** store. They still had the exact item that the daughter wanted. She had seen on it on a trip here months ago, but had not gotten it. How convenient that we were now here to get the item for her. Now all we have to do is get home without breaking it.

A final pit stop later, we headed into the grounds of the temple.

Many here, on entering temple grounds, or visiting a shrine, ritually wash hands before proceeding.

Typhoons have struck it, tsunamis (1498) have battered it and earthquakes (1923 and more) have shaken its very foundations, but the damage from those events has been repaired. One-hundred-twenty-one tons of bronze don’t move easily.

As you ascend steps to the Buddha’s plaza…

…there are a pair of lotus sculptures.

This Buddha is a “national treasure”-level symbol of Japan.

The bronze Buddha is big.

Big enough to have windows in its back.

It’s big enough that you can go inside. For an extra twenty yen, we did just that.

In the last post, I spoke of the wonderful incense burner in front of the Buddha. People were placing bundles of incense sticks inside. 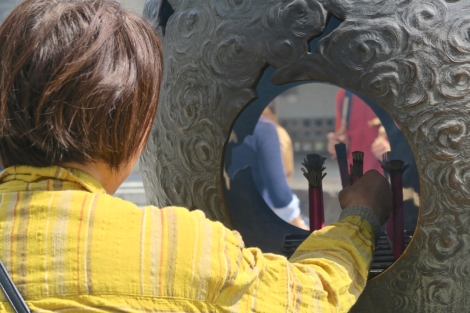 The scent dispersed throughout the area in front of the statue.

Nine hundred years from now, when I’m nothing but dispersed molecules and atoms, it’s likely that the Kamakura Buddha will still be here.