The tompostpile has decamped. The other day we rose before dawn, bused to Logan airport, and through the game of chance that is air travel, our “numbers” were lucky. Not more than twenty minutes after we walked through the doors of Logan Airport Terminal we had gotten our tickets and boarding passes, checked our baggage, gone fully shod and belted through security, and taken our seats in the waiting room. Suddenly we had about three hours to wait for our flight.

The wait eventually was over, we boarded, and off we went… 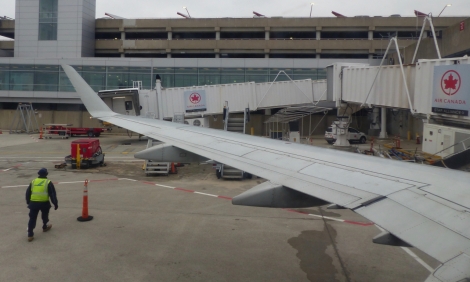 We got a final view of leftover Atlantic swells from the big northeast storm.

We passed over New York State on the way to Toronto, our first stop. A coating of snow and ice helps delineate fields, forests, rivers, and urban areas.

I loved the angularities in this section.

We flew over the Finger Lakes Region…it was wonderful to see this region. It’s an area I feel a kinship for, as it’s where my father’s mother’s family came from.

We crossed Lake Ontario. Then we descended, curving around to head towards the end of our first leg. Signs of concentrated civilization appeared. Superhighways and major roads crossed and looped, twisted and arced, in sinuous meldings of pavement. 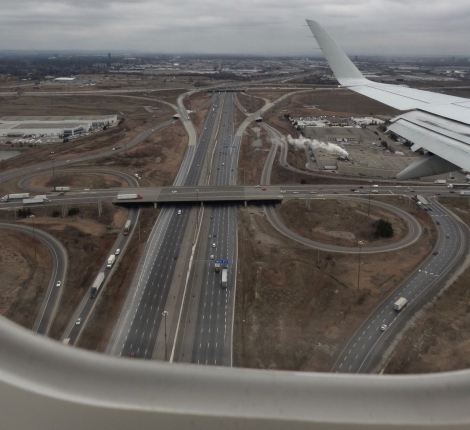 Fleets of tractor-trailer trucks came and went in convoys and clusters, heading to and from their destinations — buildings so huge that the roofs cover areas measurable in acres or even hectares.

A sculpture which from moment to moment would frame travelers in a “window”.

Only after I took this photo and downloaded the images did I see this little girl. 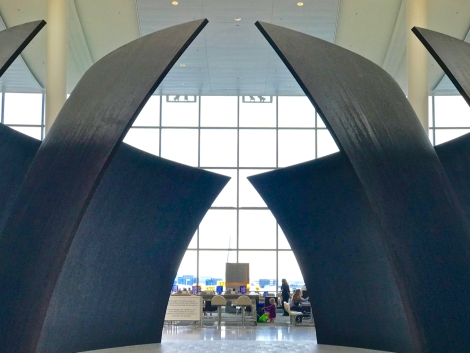 The layover was short. Over the top of the world we headed. Six miles high we were, with a temperature of minus forty-nine degrees Centigrade outside our windows. For hours, and some thousands of miles, there was nothing to be seen below but clouds. Then, passing to the north of Barrow, Alaska, an opening in the clouds showed the icy Arctic Ocean. Of a sudden, dark colors, cracks, and shaded layers revealed a “lead” of open water. Then there were clouds again.

In 1959, in Junior High School, our Geography teacher, Mrs. Vincent, made us students memorize locations in the Western Pacific. Into our heads were embedded place names like the Sea of Okhotsk, the Kamchatka Peninsula, and Sakhalin Island

Two centuries ago, these waters were familiar to whalers from New England and from Martha’s Vineyard. The world’s oceans were their hunting grounds. Now, here we were, flying over the Sea of Okhotsk, Kamchatka and Sakhalin. Those , became a seen reality in 2018.

I was so happy to see those places whose names had been sfixed into my rote memory almost sixty years before.
Mrs. Vincent would surely have been happy, too.

Then end of our long flight neared.

Below us, on a Honshu plain facing the Pacific, was Sendai. I recognized the city almost instantly. On March 11, 2011, the city was mostly destroyed by earthquake and tsunami. Video footage of the event flooded world media. That is how I knew we were over Sendai.

We saw Sendai while descending to Tokyo Haneda Airport, where son-in-law Jason waited to greet us.

For the next few weeks, thetompostpile will be operating from Japan/Nippon/Nihon. We are here to see family, who have been living here for the last year and a half. They’ll be coming home later this year, so it was time to visit while the visiting was good!

There is more to come. After a day-and-a-half I’m already a half dozen posts behind.

2 responses to “A Change of Scene”