I had visited wet and windy Black Point, and was well-soaked. 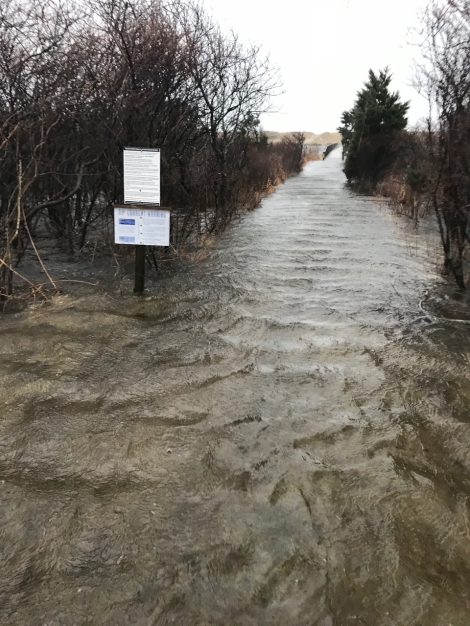 Back at the truck  I emptied the water from my boots and considered what to do next. I hadn’t made it to the beach due to conditions at the end of the walkway.

Maybe it would be possible to see what the Great Pond was like? I headed over to a public parking area and trail, and squelched and thumped my wetbooted way to the shore. Large waves were breaking over the steps that usually lead down to the edge. The wind was fierce, and a half a minute on the steps, back to the gale, was all I could stand.

Hmmm…I hadn’t made it to the beach. Should I try?

“In for a Dime, in for a Dollar” is the Americanized version of the British “In for a Penny, in for a Pound”. People have been saying this since at least 1695.

Or, “Once you’re committed to a thing, you do it…”

I had to leave the truck a few hundred yards father back than the last trip.

Most of the water you see in the photo below is usually dry land. 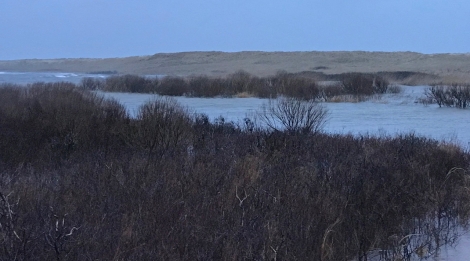 This was the Quansoo parking lot, where the day before Coquina had safely waded.

Today’s wading was only for foolish, waterlogged humans.

The north end of the bridge was starting to float, but was still sound, so I kept on. To the east, looking over Crab Creek, the Great Pond was white with foam. 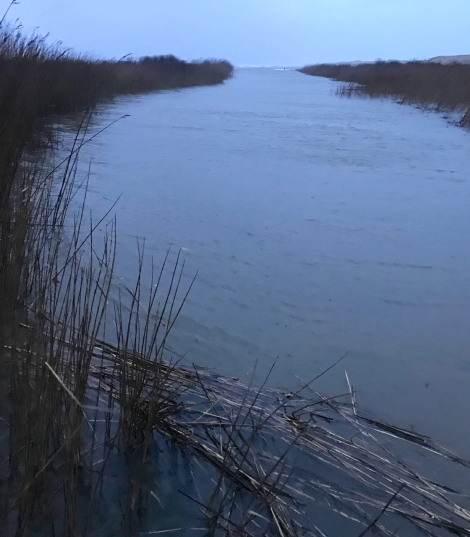 To the West it was almost impossible to tell where the edges of the creek lay.

The was water between the end of the bridge and the dunes, but the rail made it easy to get past the deep spot. 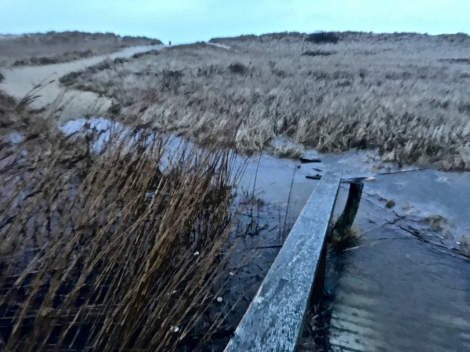 Once on the beach the swells were small, considering the intensity of the storm. The wind peeled off the wavetops as soon as they rose up.  Back-to-the-wind I walked. It was the only way to keep from being sandblasted. Interestingly, the blasting air had exposed the footprints left by last summer’s happy beachgoers. 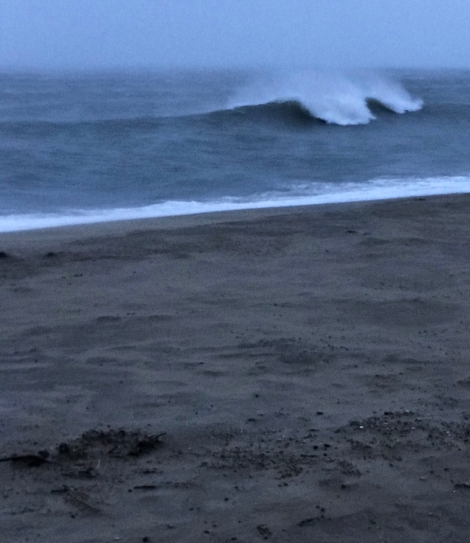 I admired how the wind tried to blow me around and knock me over as I tried to stay upright. Staggerwalking is what it was.

A few minutes was all I could take. With no rational answer for the question “What are you doing out here?”, I turned back, crossed the bridge, waded back to the truck, emptied my boots again, and drove home. I had to get out a few times to move fallen branches from the road. I’d brought the chain saw along, just in case, but didn’t need it.

I got home safely.

And all was well.

4 responses to “Quansoo in a Northeast Blow”