I’ve been meaning to climb the ladder for almost three weeks now, and hadn’t.

Yesterday I finally did.

Today is busy. We have to get the trash and recycling taken care of, have furniture to move (some gents are coming to sand and refinish the floors…after forty years or more they need some help), and this week we start drawing and Spanish classes.

Here’s a quick view of the Wishetwurra Farm Garden.  I took some close-up photos, which I’ll get to in another post, as soon as I can.

Summer’s coming to a close, though it’s still warm. In the little greenhouse, it’s cooled enough for some planting for fall and winter greens.

Inside the little greenhouse. If we’re diligent and energetic, we’ll re-cover the ‘house with new, clearer plastic this fall. What is on there now is ten years old, and was a used piece when we first got it. About time for replacement!

Panoramic view of the garden. The corn patch matured, and we harvested the ears, which are drying inside now. See the line of hay piles? That’s where the winter squash patch was. It got so overrun with pests that we just ripped out all the vines. We might have salvaged ten pounds of squash for all our pains. Such is the gardening life.

A closer view of the north end of the garden. We’ve had almost no rain in the last eight weeks, and not that much in the months preceding. We continue to water. There is hope for some rain in the next few days. Our fingers are crossed.

Near to far: the asparagus patch is ferny and green. below them fall broccoli, cabbage, etc., may be seen. Below them, the three new strawberry plantings, the middle one covered with net. Those are everbearers, and we’ve been getting a nice flush of late-season fruit. Below the strawberries are leeks, below that is the former corn patch.

Here’s the mid-garden. It looks like fall. The hay is where the winter squash used to be.

Near to far: A second planting of squash struggles on, attacked by bugs inside, and ravaged by deer wherever it grows past the limits of the fence. Then comes the winter carrots, which thanks to watering, are doing fine. The hay marks the area formerly trying to grow winter squash. Then comes a miscelleney of greens, herbs, peppers and soybeans. Below that the row of tomatoes, well-infected with blight but still bearing.

Here’s what the deer did to a squash that tried to grow outside the fence.

Since the last report, we’ve brought in six or seven more loads of manure, three loads of seaweed for mulch, and two loads of hay, also for mulch. We’re building up the compost pile, improving the soil, and looking towards to cold part of the year.

The berry patch. They didn’t bear all that well this year, so we’ve given them fertilizer, spread three loads of Omar and Sheila’s finest horse poo on the patch, watered well, and topped off with a mulch of two loads of Chilmark Pond eelgrass. Next year should be better.

The great Riley Puckett sings of being “ragged but right”.

You can go to youtube and hear the tune.

“Ragged but Right” is the phrase that came to mind when I saw this pair of yellow cactus-flowed zinnias. 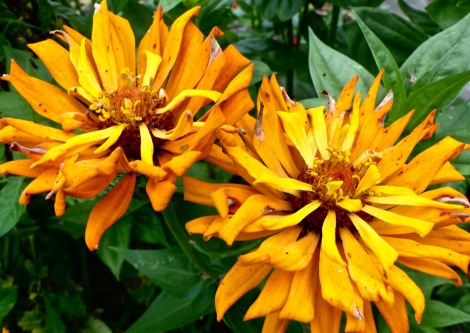 Mature zinnias. Mature is good. The older I get the better “mature” seems to be…

Well, here’s to “ragged but right”.

We’ll be back soon.