We’re off for a late afternoon walk to an old familiar place. 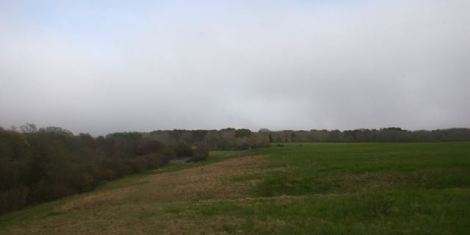 Ever since I was a boy, this field felt like a magical place.

Off to where a brook enters a pond.

In the brook are some ripples.

Ripples of some thing, moving in the water.

The expanding, ringlike waves were moving upstream, and caught my attention.

Moving upstream in the current.

Turtle thinks “What’s that?” too.

Turtle raises eyes above water to better see what is moving around on the bank.

After studying the human on the shore, the turtle continued to move upstream, pausing occasionally to be sure that shore creature was not a threat.

Not much is a threat to an animal with jaws as fast and as mobile as the snapping turtle’s.

Once upstream of me by twenty or thirty feet, the turtle moved over to the edge of the brook.

And then it wasn’t there.

It must have made a pocket, a hideyhole, previously.

Because the disappearing act took less than twenty seconds.