Corn (as the folks at Fedco Seeds are fond of saying) is amaizing.

Also amazing is how many thousands of times you can look at something and not see it.

How many times have you seen corn?

How many times have you carefully looked at a corn kernel?

This year we got adventurous with the corn patch. Instead of planting just our favorite “Fioriani” red flour corn, we also planted some “Dutch Butter” popcorn and some “Indian Corn”. The indian corn was from an off-the-rack packet from a cheapo discount store. It was purchased in a moment of whim and impulse.

At the end of the season, husking the indian corn ears turned out to be a visual treat. There were long ears, short ears, skinny ears and fat ears. Some of the husks had tinges of color. After removing the husks, we saw that some ears were all one color, while other ears seemed to have no two kernels the same color. There were blue kernels, and greens, yellows, oranges, striped multicolors, and reds. There were kernels so dark purple they were essentially black.

One of the standout ears was a red one. It was a perfect perfect ear of corn. Worms had not touched it during the summer. The red had just a sprinkling of darker seeds, which accentuated the overall perception of redness. Even the cob was tinted red. The kernels were large, full, and hard. Some of the kernels had domed tops, but most had a little dent at the tip.

What an impressive ear of corn. 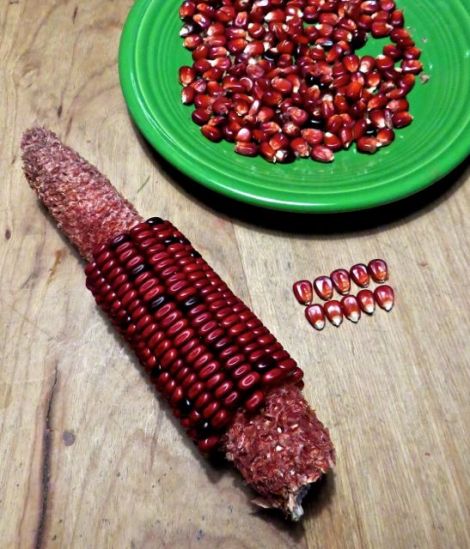 I started to look at the ear more closely.

First, from the bottom of the cob, looking towards the tip.

And then from the tip, looking down towards the base.

At a certain moment, the light struck the kernels from the side.

Which is when I saw something I’d never noticed before.

One side of a corn kernel is not like the other.

One side, the side that grows facing down, is smooth.

The other side, that is “up”, and faces the tip of the cob, has a depression.

It turns out that corn seeds are not symmetrical, and that the base of the pushed-in area, near the place where the seed grows from the cob, is where the germ of the seed is located. If you go back and look at the first three photos, it’s possible to notice this difference between the tops and bottoms. (But did you?)

All this is a reminder.

A reminder of how much we are capable of not noticing!

We’re going to grind about half of this ear into meal, to test-cook some corncakes with.

If it tastes as good as it looks, we’ll plant a bunch of the seeds as part of our next year’s corn patch. If the seeds yield ears as nice as this one, we’ll keep growing it and reselecting it in the future.

One year later: We planted a flat of kernels from this ear. Ten or fifteen percent of the seedlings came up almost white, and not green. It might not have been very scientific of us, but we rejected those seedlings, and did not plant them. We planted twenty hills at three plants per hill. As the plants began to die in early September, we picked the ears. When we husked them, we found not uniformity, but variety. None of the ears looked like the ear from which the seed came. Some kernels had the “dent” at top, but most were round-topped.

Heredity at work! The beautiful ear came from that cheap discount store package of corn. There is no way of telling where it came from, and what the parent stock was, so it should not be a surprise that the offspring were a very mixed lot.

One year later, the seeds from the “beautiful ear” have yielded ears that are a mix of color and size.

Most of the ears were copper to red to almost black. 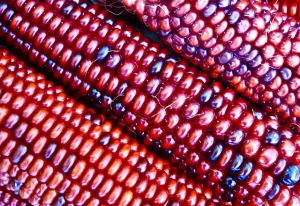 Some dented kernels, but lots of round tops, as is shown by the reflections… Looking somewhat like the parent ear, but no way are these clones.

About twenty per cent were whitish to yellow multicolors.

On the light-colored ears were whites, creams, yellows, blues, purples, and reddishes. (Not radishes.) Who’s your mommy?

Two had striped kernels, with multiple colors in each ear.

One of the questions we started with was “What will the children be like?”.

Now the question is whether to continue the experiment.

And if we continue, which ear do we choose?

6 responses to “How Corny Can You Get?”