In Vermont, while we walked in Sabin’s Pasture with a grandson, a flock of Canada Geese flew overhead.

They made an almost perfect “vee” shape overhead. 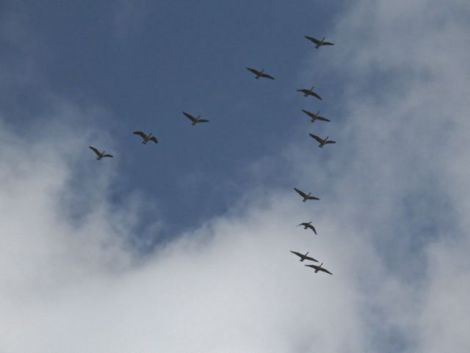 A few minutes later, another, bigger flock flew over.

Where was their vee? 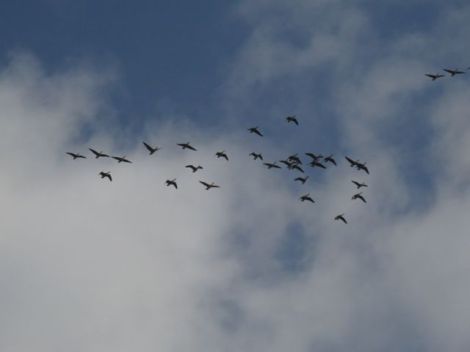 Less than thirty seconds after the first image, the flock’s vee was almost fully reformed. 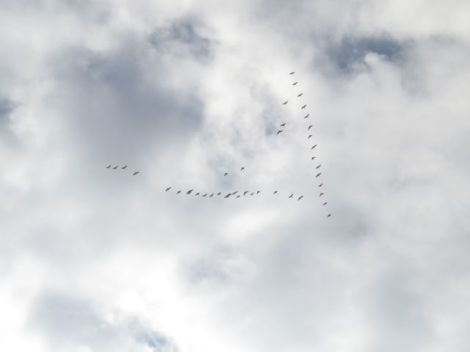 Why do so many birds fly in formation?

A brief answer is that it is a quick and easy way for the group to save energy. Flying in a flock lets the birds behind the leader to expend less energy to fly a given distance. Among humans, you see a similar phenomenon with bicycle racers, who “draft” each other in packs called “pelotons”, to take advantage of their fellow bikers. Since front position takes more energy, peloton heads will swap positions, to allow fresh riders to take the lead position. Everybody benefits.

So it is with the geese.

If you want to know more about flocking and vee formations, go to this link.

One of my mother’s favorite stories was about the young child who had to write a book report. The child chose a big book about penguins. The book report was as short as the book was long, and read:

“This book told me more than I wanted to know about penguins.”

3 responses to “V is for Goose”