When I was in my twenties, during the garden season, I would work 8-10 hours a day and also garden for a couple of hours before work and a couple of hours after work. I sometimes wish I still had that energy and stamina, but life is so much more peaceful now than then, so not being able to put in so many hours ain’t so bad. I wish I had pictures of those years-ago gardens, but they all burned up in the Great House Fire of 1985. You’ll have to use your imagination if you want to see what those gardens were like.

I saw my first stinkhorn mushroom in that garden, under the shade of that asparagus. The shaft of the pink stinkhorn popped up through the strata of rich sheep shit that mulched the ‘sparagus  patch. It looked like a ‘sparagus, a little, but whoa, was it ever the wrong color. And what it looked like! That the Latin Family name for these, the Phallaceae, should give you an idea. The full name for the common stinkhorn is Phallus impudicans, which for a scientific name is downright graphic.

It’s the first week of June. Spring has been cool and very dry. Our “normal” range of rainfall for this time of year is three to five inches a month. In the last few months I don’t think we’ve gotten more than two or three inches of rain.  Last week, turning over logs with a grandson, looking for bugs or whatever, we found an estivating earthworm, curled up in a little chamber it had made, waiting for wetter weather.

Wishetwurra Farm, where we have not applied water, is a dry place right now. One spring purchase for the garden has been about five hundred feet of the new (to me) style fabric soaker hose, which has worked out very successfully.

The bare-looking area is the asparagus patch, which are keeping plucked clean, except for the tiny spears of the new plants we put in last year — those we’re leaving alone, so they’ll get big and strong. Freshly mulched currants at L side of image. As you see, the hose is out. 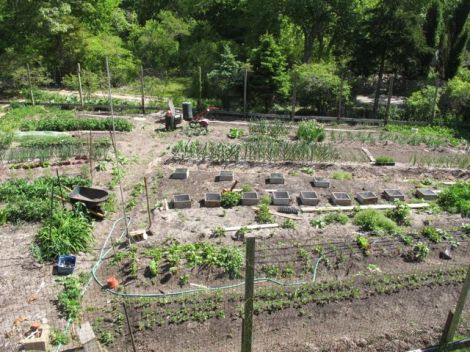 Boxes with screen tops cover squash family transplants and seedings, to protect them from the inevitable onslaught of striped cucumber beetles. You can see the dark lines of the new soaker hose in one of the near beds. Nearest bed is this spring’s planting of strawberries. Four different kinds. A small-fruited “fraise de bois” type, two June-bearers, and a day-neutral everbearing type.

Farther back from the squash boxes is the garlic bed, and in the far bed are various spring greens, plus onions and leeks.

Inside the greenhouse, it’s green.

Contents: a mix of greens and lettuces for cutting, plus started flats and pots of seedlings. The brown at middle back of the image is a dead potted rosemary. Last winter was the coldest in years, with some sub-zero temperatures. It was too cold for the rosemary, which died. The hydrangea by the outside shower died back to the roots.

R…Leeks and onions. Then the new strawberries. 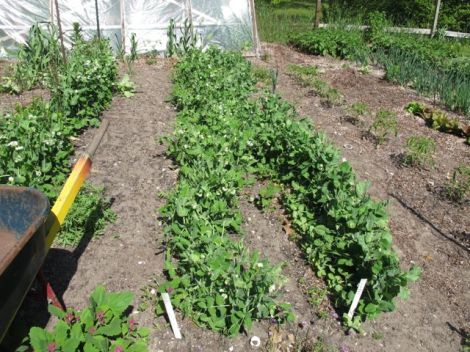 First pea planting. Pods are setting. It won’t be long until we get those ambrosial first June peas. 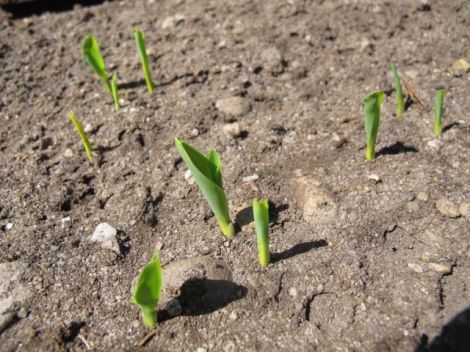 Next year’s corn meal has emerged.

The ‘allée” of garlic. Visitors this time of year often say, “Oh, my! Your corn is so tall!” 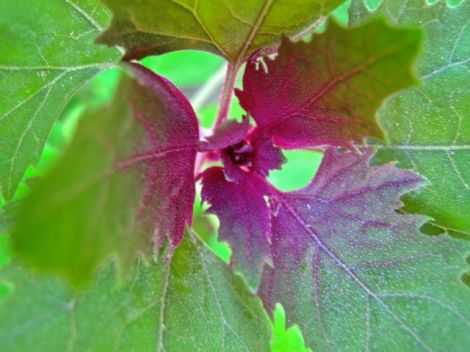 Last year or the year before, I let the “magenta spreen” go to seed, and now have volunteers coming up, seemingly everywhere. Spreen is an amaranth. Looks really pretty in a salad. It’s a wonderful cooked green, too. When you pick it, the pink stuff of the new growth rubs off, and you get magenta fingers.

We’ll do some garden close-ups in the near future.

Meanwhile, do the rain dance for us, OK?