Posts have been few lately.

We’ve been Away, and have been distracted. 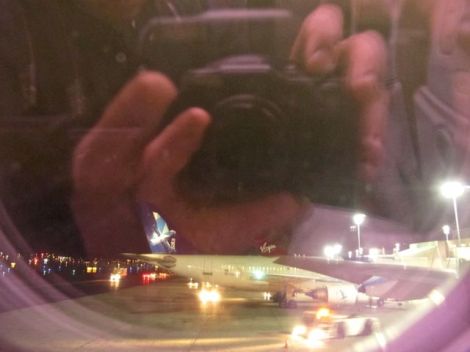 The runway lights at Logan Airport were musically pretty. 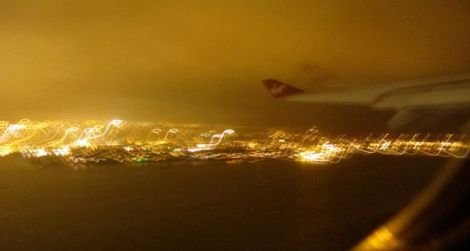 We went, as some now say, “Across the Pond”.

To use such a phrase is an incredibly cavalier statement about a phenomenally astonishing event.

A few hundred hundred years ago, an Atlantic crossing could take you three or four weeks, provided you had good wind and weather. With bad weather your crossing might take as long as three to four months. If you could not pay up front for your travel, and still wanted to cross the Atlantic, you could sign a contract to be an “indentured worker”, and get a paid-for ride, one-way to the New World. Your trip would cost you seven years of your own labor, due and payable to the person who paid your fare. That’s right, seven years. You got to be a slave for seven years, for a one-way ticket “across the pond”.

“Across the pond” is something no indentured servant said, not ever.

Today you can get on a plane. In hours, you can cross the Atlantic Ocean.

And you can make this trip for a relatively modest sum of money,

How modest is that sum? The cost of a roundtrip ticket represents two to three weeks of work at minimum wage, an amount which makes crossing the Atlantic an attainable goal for not thousands, or tens or hundreds of thousands, but for millions and tens of millions of people.

And the journey itself? Nowadays it’s not even a journey! The word journey comes from “jour”, the French word for “day”. Today’s trip doesn’t even take a third of a day.

But in the trivial amount of time the flight takes, there are miracles upon miracles.

The first miracle is that you fly!

And you fly high.

You reach altitudes of six, seven eight miles or more. These altitudes are literally “nosebleed” high. At eight miles high, the temperature outside a jet plane is fifty to sixty degrees below zero. Throughout the trip you are warm, reasonably comfortable, and safe, especially so when compared to the risks of trans-Atlantic travel in the seventeenth and eighteenth centuries. At these altitudes the horizon is no longer straight — look out your window, and behold!

Out there, outside your window, in the distance is a sight far more miraculous than a double rainbow.

Outside that window the curvature of the earth is manifest.

You see something no human ever saw until very recently.

The bended rim of the planet.

Then, midflight, looking northwest to the arctic, that bended rim became limned in a shimmering green aurorean curtain. 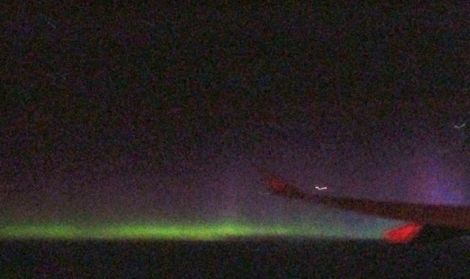 A few hours later came the next miracle.

One unlike any you can ever see on earth. 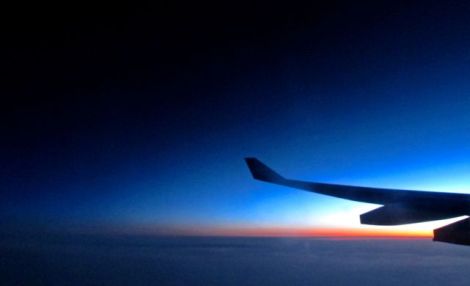 2 responses to “The Slanted Dawn”