A photograph of the Nonamessett House with snow covering its roof. 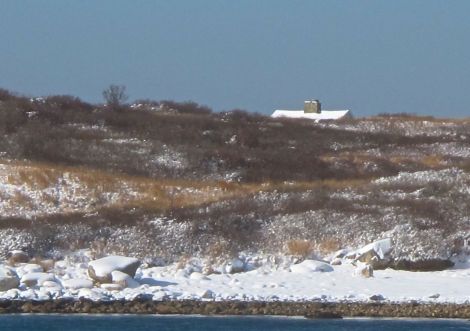 A snowy roof on the Nonamessett house.

The Nonamesset house is a wonderful subject, even in the monochromatic.

I have been taking pictures of this house for some years now.

I expect to be taking pictures of this house for years to come.

Edward Steichen, in his later years, as he aged and became less mobile, took thousands of photographs. At his home, often from just one window of his home. He invested uncounted hours taking photographs and even movies of one little shad-blow tree.

There’s a wonderful video clip about Steichen and the shad-blow, that I invite you to be distracted by.

Almost every time I ride the ferry between the Island and the Main, the Nonamessett House is in my viewfinder.

I have not yet succeeded in getting two identical photographs of this place.

That will probably never happen.

3 responses to “Some Musings on the Nonamessett House.”