Interspersed amidst the vegetable garden pictures in the MV Garden Club presentation were pictures of flowers.

But maybe you knew that already.

There were also pictures of bugs.

Here they are, with additional commentary.

The bumblebees get terrifically enthusiastic about the amount of pollen in these blooms. It’s easy to see why.

House fly ensconced in a red dahlia petal. House flies have lived on earth for sixty-five million years. Humans, not so long.

Tithonia. Grow them in poorer soil, so their necks don’t get weak. Tolerates dryness, too. In the photo, a pair of bumblebees hug tithonia blossoms on an overcast September afternoon. Hummingbirds love tithonia, too. So do butterflies.

Bumblebee in butterflyweed. (Asclepias tuberosa). Alice Mathewson used to mow her field in May, to set her butterfly weed plants back, so they’d bloom in August at Fair time. Nowadays the MVAS doesn’t allow the use of butterflyweed at the Fair. 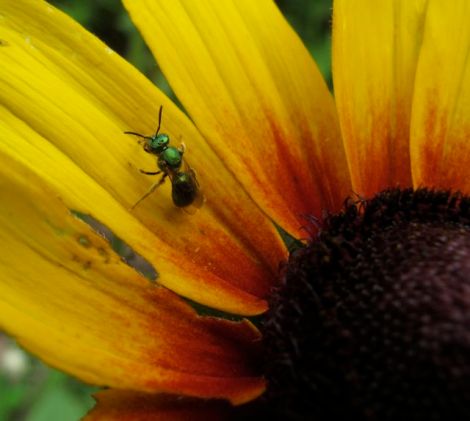 Emerald bees are the crown jewels of our local wild bees.

Emerald bee, wallowing in the stamens of an opuntia cactus. 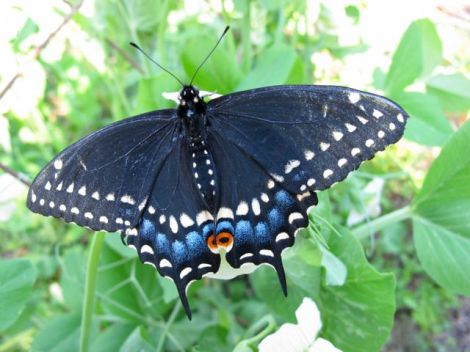 Apologies are due. At the talk I identified this as a black swallowtail. Wrong. It’s a spicebush swallowtail. For a place to lay its eggs, this species favors spicebush (clethra) and sassafrass, which grow in profusion near Wishetwurra Farm.

A great black wasp, I think a Sphex species, on a basil plant. Look at the yellow objects on its right front leg. Probably pollinia (pollen bodies) from a milkweed. If you look carefully, you’ll notice that the was is eating…there’s one of these pollinia in the wasp’s jaws!

Foragers on mint. I don’t have an ID for either of these critters, sorry.
That’s one strong-looking wasp.

A crab spider waits its next meal, on the trumpet of a white daffodil. 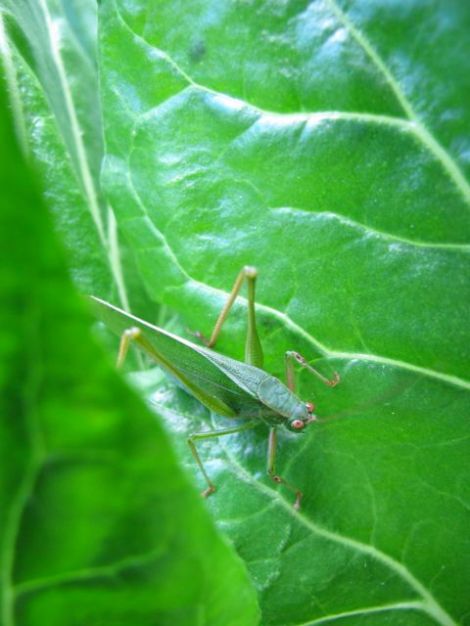 A katydid, hiding in swiss chard leaves. Those eyes sure do look funny.

And the spring classic: ants on peony blossoms.
Paeon was a student of Asclepius, the Greek god of medicine.
The two had a major falling-out.
To save Paeon’s life, Zeus turned him into a peony.
Good job, Zeus.

One early tompostpile post is 24 words and a single image.

A peony, of course.