In our last post, we mentioned a couple of mysteries.

Since that post, we’ve discovered a few things about our mysteries.

First there was the mystery worm.

The critter was  not a future woodboring beetle, as I had first thought, but a moth larva.

The answer, “prionoxystus moth larva”,  came from two sources: first from the good people at bug guide dot net, and second from Dr. Paul Goldstein (at the Smithsonian).

The common name for Prionoxystus is “Carpentermoth”. The scientific name is from the Greek prion, -o (πριων) a saw, plus xyst scraped, or a scraper. You’d have a name like that if your jaws could hack through oakbark and oakwood, to make yourself a hibernaculum in a hardwood tree.

Paul supplied  a link to some photos, at another excellent website, . Take a side trip to the link below if you’d like to see photos of the adult moth.

We move along to Mystery Number Two.

The mystery of the knife blade tip, which appeared in a bolt of oak when it was first split in half.

A knifetip was sticking out from a sea of red oak, like a shark fin on the surface of the sea. 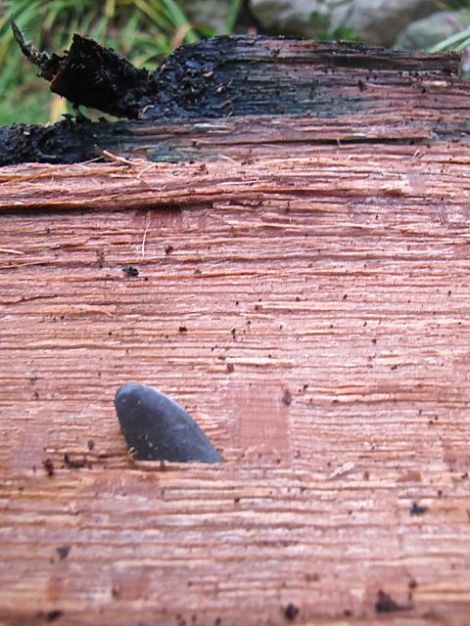 Yesterday my young grandson Tristan was with us. We took the piece of oak over to the shop, clamped it down to the workbench operating table, and began exploratory surgery.

A pass with a plane, over a bump on the outside of the log, revealed metal. The metal took a chip out of the plane blade, darnit, so we switched tools, and used a rotary sander to expose a little more of the knife-end.

With this part of the procedure we learned the extent of the area occupied by the knife. So far so good.

We took out Tristan’s great-grandfather’s arbor vitae mallet, and a nice sharp little gouge that I use for carving signs. Taptaptap, we began chipping away the oak.

Sudden discovery of the actual blade location chipped our gouge. Oh well, another blade down. Another tool to resharpen. But, tools are to be used, aren’t they? We switched gouges, and kept going. After a while, we’d uncovered the greater part of the blade. 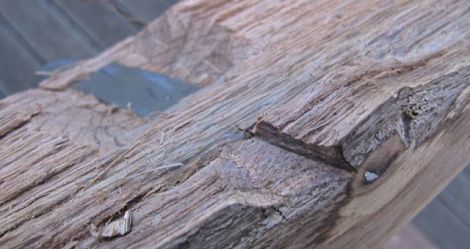 Another mystery was “how deeply did this knife go in?”.

Answer: The tip of the blade is almost five inches into solid oak.

Yet another mystery was when did this happen? We discovered a sudden change in the grain, about an inch in from the outside of the log. Notice how the pink and gray straight grain of the interior of the log develops a dark line, and how the straight lines change to a “bump”? That change marks the spot and the moment when the the knife went into the tree. For a while, for some years, the tree kept growing, and growing around the knife.

What kind of force is required to drive a knife four inches into living oak? A LOT! My theory is that nobody can throw a knife that hard, so whover put this knife in the tree probably drove it in, on purpose,  with a hammer. But why????

So when did this happen? We can count at least ten growth rings rom the “break” in the woodgrain to the last of the sound wood. Above that sound wood was a layer of rotted sapwood, where rings can’t be discerned. We’ll have to add some years for this time period. The tree was dead, so there is also some “mystery” time to add for when the tree was no longer encasing the knife.

So, ten known years of growing-in, plus five to ten years or more of possible additional time, mean that the knife was stuck into the tree sometime between 1990 and 2000.

We’ve cleared up some mysteries.