In the predawn dark I found the camera, set the exposure to fifteen seconds, and started taking pictures. The only available light came from a nightlight and from lights on the “standby” powered electrical appliances…sometimes referred to as”vampire” electric-use.

The red light on the teevee was like  a stare from a one-eyed corpse.

Maybe instead of vampire electricity we should call it “zombie” power?

Nightlight reflections on the floor. Twenty-five years after being laid, the slate has acquired a patina, but shows little wear. There are some smooth spots near the wood stove, where the rocking chairs rock in the wintertime. But you hardly notice them, unless you know where to look.

What happens if you move the camera a few times during your fifteen seconds?

What happens if you move the camera down and to the side in stairstep fashion?

If I had the technological skills and the right photo program, I’d “flip” this image. Then it would look like Marcel DuChamp’s 1912 painting, “Nude Descending a Staircase”.

Put the camera on the floor. Pan in a staccato fashion.

If you want any kind of sharp focus, the fifteeen-second exposure time makes bracing the camera a necessary stratagem. I almost never use a tripod. I do have an old one that somebody gave me, but I don’t even remember where I’ve but it. At this stage in my photographic life, my guiding principle is to have as little equipment as possible. My idea of a well-stocked equipment kit is plenty of extra batteries and some extra memory chips. A battery or two in my pocket, and a spare chip in my wallet is about right. Some photographers have told me I should get a “real” camera. I respect them for their suggestions (these folks are excellent photographers), but for now, less seems like so much more.

For the next shot I placed the camera flat on a kitchen counter.

We’re looking up at the beam in the kitchen ceiling. 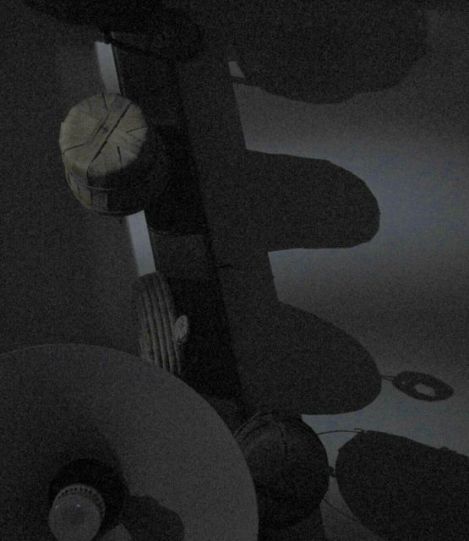