Now that the corn is as high as an elephant’s eye, the Iowa Girl wants to come get her portrait taken.

This maize is not a maze, but is planted in blocks. Easy in, easy out.

Right now, we’re getting some teaser raindrops from some passing showers, but we’re not too hopeful about getting that three-quarters of an inch of rain that would be the Perfect Thing for the Wishetwurra Farm Garden.

Maybe later in the week.

Maybe storm Chantal will bring us our needed rain. Chantal, according to the weather people, is “churning” in the Caribbean Sea right now. Uh, please, meteorologists, could you use other adjectives once in a while? In your world, tropical storms and hurricanes are always churning. Have you ever gotten butter from one of these storms? Probably not. So, Chantal should be named “Cream”? Then maybe we’d get butter.

Names. Our Atlantic hurricane names are so boring when compared to the Pacific hurricanes/typhoons. Wouldn’t it be cool to have names like Yutu, Toraji, Man-yi, Usagi, Pabuk, Wutip, Sepat or Fitow? What names have we had in the Atlantic? Bill, Carol, Donna, and so on. At least this year’s Chantal is a bit more exotic.

The “N” storm for this year does break the mold. N will be storm “Nestor”! Nestor, whose wisdom and eloquence were proverbial. Nestor the argonaut, the centaur-fighter, and the hunter of the Calydonian Boar! The boar whose hide was won by Atalanta, since her arrow was the first to strike that evil, marauding tusker. That caused no end of trouble, but that’s another story.

The garden is whining….

You’d be thirsty too, if you hadn’t gotten much water for a few weeks.

We’ve had plenty of water up until mid-June, and the garden has been giving us plenty to chew on. Today’s is a series of portraits of what’s happening.

L to R. Tomatoes, potatoes, red amaranth greens, edamame, leeks, dill, and other things, too, if you look carefully. Over by the house you can see a cloud of dogwood blossom.

You can find borage and sunflower in the next photo.

Early jersey cabbage. We’ve made a couple of cole slaw salads, one all cabbage, one half cabbage and half bok choi. Both were excellent. We used homemade mayonnaise for dressing.

The broccoli has been good.

It’s almost time to start the broccoli seedlings for the fall crop. Gardening is a year-round activity.

From the name, I’d always though of kohlrabi as a german vegetable, but it turns out that it’s a popular food item in India, too. Wiki: “Kohlrabi is an important part of the Kashmiri diet and one of the most commonly cooked foods. It is prepared with its leaves and served with a light gravy and eaten with rice.” Nice.

Full summer, with gloriously long days, is here. The screech owls in the woods around the Farm have been vocal, churring and hootle-ing until the first light of dawn.

Full summer, when the tomatoes come. Yesterday we had our first picking of more than a cherry tomato or two. Three-quarters of a pound, said the scale. 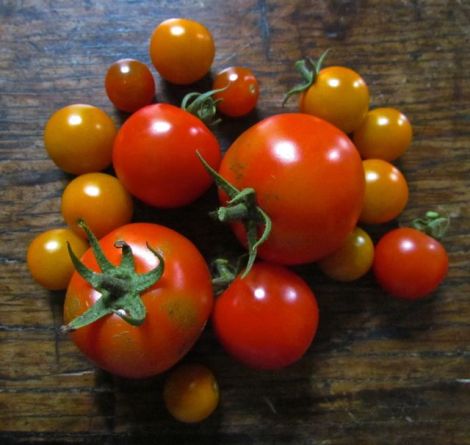 Sungold yellow cherry, unknown red sport from sungold seed package, and “mountain magic” cluster tomato, being grown as an experiment this year, on account of reputed blight resistance. Blights are one of the curses of the Wishetwurra Farm garden.

The neighbors’ honeybees are still delighting in the last of the volunteer poppy flowers. 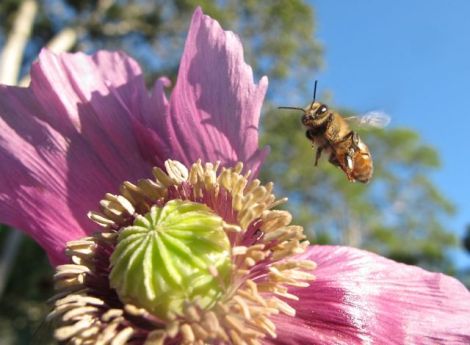 Coming in for a landing…

Later today I shall raise and ascend the Herb Poindexter Memorial Ladder, to photograph the garden for the July monthly report.

2 responses to “The Wishetwurra Farm Garden in July. Churning Away!”