There’s enough time to go out for about an hour. I head out the door and start walking out the road, not knowing exactly where to go. The sound of a car coming down the road behind me feels intrusive. To avoid it, I take a turn into the field on the right, and can decelerate into “looking” mode.

On this late November morning, a few spiders are still spinning webs. They shine, bedewed, in the grass. I walk to a grove of evergreens. Underneath a spruce tree that I helped plant, with my mother and my sister, about fifty-five years ago, is a chunk of bone. Its surface is marked all over, inside and outside, chewed by calcium-craving rodents. 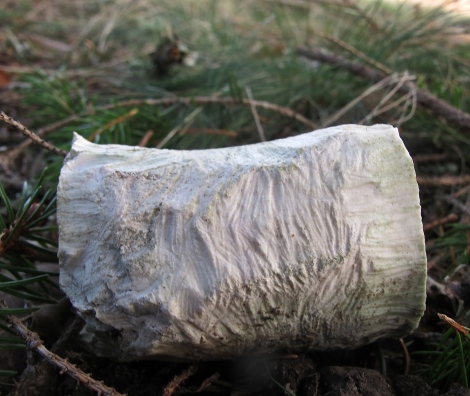 From the grove to the edge of Look’s Pond is a few hundred feet. Little bluestem grass is russet, lowbush blueberries form maroon patches, and green notes come from mosses and from young conifers. At the edge of the field, a little pitch pine has met a setback. A passing buck, or bucks, with their antlers, have rubbed completely through the outer bark.

On the ground next to the little pine is a fallen and licheny sassafras branch.

Quacks come from the water below the slope. I’ve moved slowly enough not to alarm the ducks visiting the pond, though they’re aware of me, and swim slowly away. 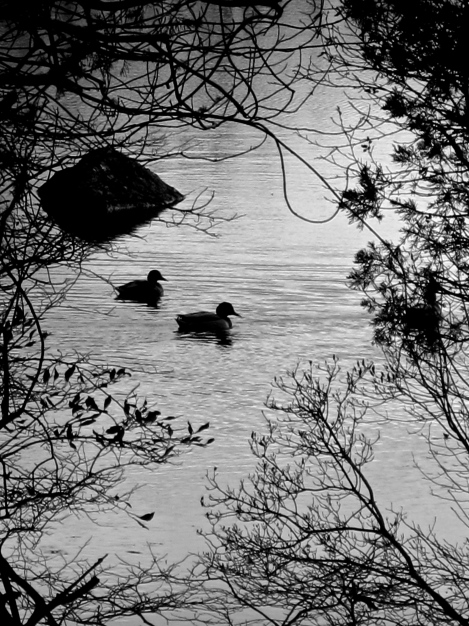 I go back uphill by way of a little valley that passes the house I grew up in. In the yard are some cedar trees, which once were too short to tie a badminton net to. Now they’re between a foot and eighteen inches thick where they emerge from the lawn, and between twenty and thirty feet tall. Ten years ago I pruned them, removing dead and small branches. Today I see that the trees are growing back around and over where those branches once were. I tilt my head and notice a branch scar that looks like the eye of a sleepy dinosaur.

The next waypoint of the walk comes to mind. I head down the road, to go over to the neighbor’s house to see if her horses have produced enough manure to make a trip with the pickup truck worthwhile. Along the way, the branches of the trees are are busy with chickadees, nuthatches, sparrows, flickers, bluejays, and more. They are all out on “noticing” forays of their own.

I slip through the electric fence that contains the horses, say hello to them, and go to their barn to see how well they’ve been tending to business. There’s a modest truckload, in two different locations, but there will be no harm in waiting a week or two. A family of woodpeckers is tapping along the trimboards of the stable, hoping to sound out grubs or larvae. What beautiful birds.

Looking for a meal.

I decide to cross Music Street, and to go home by way of Jerry’s Pond. I love this old house. I learned a little bit about how to ride here.

One of the things I remember from this place is the time I didn’t flatten my hand when presenting an apple to my horse. The blaze of pain from the bite of those jaws is a memory indelible. I remember other, nicer things, too. Like the sight of an orchard oriole in the branches of an apple tree in full bloom.

In the brush near the house, I find a partial skull of a deer, a young buck, who died with his first “spike” antlers on. The skull goes into my jacket pocket, and it will join another buck’s skull on an outside table, back at the house.

I pass through a patch of field in succession, its grass being crowded out by cedar, hawthorne, blueberry, viburnum sumac and wild roses. Young oaks are shouldering their way to the sky.

An old utility pole still has its nailed-on aluminum “C & V E CO” name strip, and it number. The number 3 means that this is the third pole of a line that comes in from Middle Road. The C&V E CO and its successors have been swallowed multiple times by corporate buyouts and mergers. It gets hard to keep up with the name changes.

Then I pass a pond with three names. Most maps call it Davis Pond. Most locals call it Jerry’s Pond. A few of the locals, mostly those nearest the pond, call it Glimmerglass Pond. That name is from the Victorian Era. Ducks are here, too. 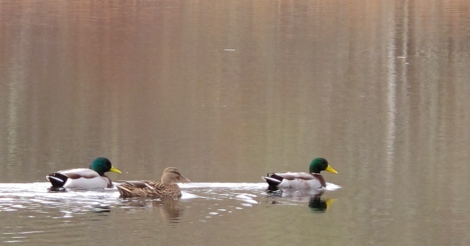 This is an old mill pond, one of the mill ponds built by the first white settlers of the Vineyard. Near the outflow of the dam, a beech tree and a maple tree seem at combat. The beech grows so close to the maple that an anaconda of maple root is trying to strangle the beech.

From here I go up the path to the road, up a hill and past grandmother’s house, on the way home. Under a utility pole is a dead squirrel. Did it accidentally electrocute itself? There’s not a mark on it, as it lies on the ground, front and rear paws clasped together, its unseeing eyes still open. I feel its paws and claws with my fingertips, then lift the animal’s body, which is surprising heavy, and dense. Such power, such strength. Suddenly I better understand how well fitted these creatures are for making their homes and their living up in the trees.

The tail is as large as the body, but is as ephemeral as the body is dense.

A close look at the squirrel’s tail reveals bands of colors, and of stripes inside stripes.

I don’t want a passing truck to squash this deceased gem of creation, and then think that it might be nice if my grandson, who might be exploring around here, could find the squirrel. I move the body from the road to the top of a nearby rock. Maybe he’ll find it, maybe he won’t.

In the yard at the house I notice the japanese maple, a years-ago Fathers Day gift from my family. Every year it is the last tree in the yard to lose hold of its leaves.

Today its leaves are ablaze with the red of death and resurrection.

86 responses to “What Can You See in Fifty-five Minutes and Thirty Seconds?”