It has been about four weeks since the last pair of Wishetwurra Farm Garden Overview pictures.

Time to put up the ladder, and to step, step, step, ascend sixteen feet, to lean on our shingly Goat Barn roof viewpoint.

We begin, as usual, with the “upper”, more northerly end of the garden…

In the four weeks between these photos, the tater tops have just about all died. The only potato able to resist this year’s blightiness was the “Elba” variety from Moose Tubers. The fall greens, broccoli, kales, minestra nera, collards, and the second planting of basil, have all taken hold and are growing well. Winter carrots are throwing up nice big leaves, a sign that their roots are getting some size. The compost bin is filling up with garden debris, as plants die, or are harvested.

The next pair of pictures is the “mid-garden” area.

You see that the onions are harvested, and the beds are manured and put to bed with oats and peas. The peas are an annual “gamble”…if conditions and timing are right, we’ll get some fall peas in late October or even in November.

Moving on to the “lower end”.

In which we see the midsummer garden change to late summer garden. Everything bets bigger, and more mature. Blight eats at the tomatoes, starting at ground level. You can see the end coming, but in the meantime, we’re dealing with the annual August flood of tomatoes. We chop up chunks to freeze, concoct sauces, and run batch after batch of slices through the dehydrator. It’s amazing how a heavy, many-pounds-laden tray-basket of red fruit can turn into a lightweight gallon bag of sere tomato essence.

The winter squash and pumpkin patch explodes. So does the population of dratted fershenluggener squash bugs.  Yesterday they were able to slightly redeem themselves by posing, in all their life stages from herds of wee ones to shepherding adults, for our friend Sally, who has been photographing garden pests this summer. Sally also enjoyed the excision, uncovering and “exposure” of some squash stem borers, whose activity vitiates zucchini and its ilk. 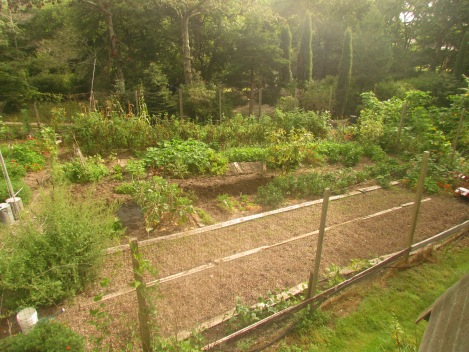 The gardener’s focus and awareness are in constant flux. Now, the focus is on finishing, and on fall, and on the future. So the truck and I visit nearby manure piles, collecting fertility for the future. Happy is the day that sees yet another load forked, another load wheelbarrowed into the garden, loads which are spread, leveled, and seeded to winter cover crops. The latest batch of manure, a fine, redolent, chunky, dense mix of horse, cow, sheep dung, plus mixed bedding materials, was load number seventeen for this gardening year. I recently read a nineteenth century bit of garden advice, which equated success in the garden with “hauling”. Well said, Nineteenth Century. That advice is still excellent.

We will finish with a small gallery of recent garden details.