We will eat edamame. 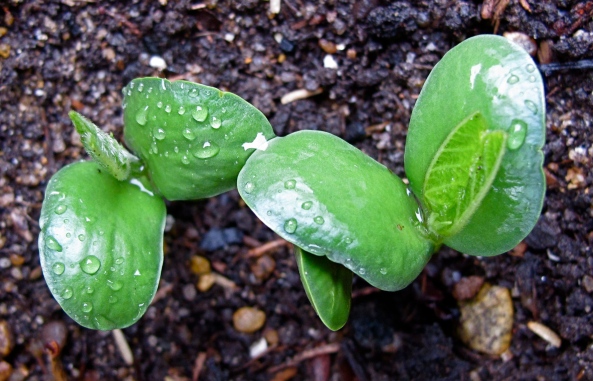 Seeds.
Seeds come in so many sizes and so many forms.
Tobacco seed is as fine as dust. Refrain from sneezing when you’re planting tobacco. Celery seed is barely bigger. Shake the curly tipped pods of columbine over your palm. Out pour seeds as black as jet and as shiny as gems. Mustard and cole family seeds are tiny tan to brown to black spheres. They can roll with astonishing speed on the slightest slope. Don’t let your attention wander when you open the seed package. Dill and parsnip have flakelike seeds, their germ neatly packaged in the center. Rub them, and the smell released is of the plant they will become.
Beans’ seeds come in multitudinous variations of size, form and coloration. I’ve got some dying beans in the garden whose seeds are almost round. They are as ruby colored as any cranberry. Another bean has a seed that with its black and white pattern is nothing less than Yang and Yin. Think of the Bean, as the Tao, leguminously personifed.
Maize, the rainbow crop, with seeds that come in colors everywhere. Tints and shades of maroon, red, orange, yellow, green, blue, purple and to browns. The spectrum of corn is bookended by kernels white and kernels nearly black.
Calendula seeds, curled and spiny, have always reminded me of miniature lizards.
A falling coconut can kill.

2 responses to “Soy Haiku, And a Few Words about Seeds.”