Yesterday was one of those hot July days that make you change your T-shirt three or four times in the course of a day. At five AM it was still almost 80, and once the sun was up, it didn’t get any cooler. By three o’clock in the afternoon, the weather map was starting to show hot colors, as NOAA Weather posted storm watches and warnings, even flash flood warnings, for the mainland. Although trees surround Wishetwurra Farm, through the branches we could see a high cloud deck, moving in from the northwest. If we were to get any beach time in, for cooling-off purposes, it was time.

We shoehorned a grandson into a car seat and headed north, then east, then south. At the shore,there was still a little unclouded space left in the southeastern sky, but weather was surely moving in.

Atlantic Ocean water has been warm this summer. We each took quick dips, taking turns so we could keep tabs on a certain fast-moving three year old. The waves were between three and four feet high, and were coming irregularly. Swimming in them was active, even interactive. Duck ’em and dodge ’em. Dive under ’em.

The clouds to the northwest thickened, and piled. Through the lower clouds, the top of higher and more distant clouds, big gray mountainous piles of them, could be seen. 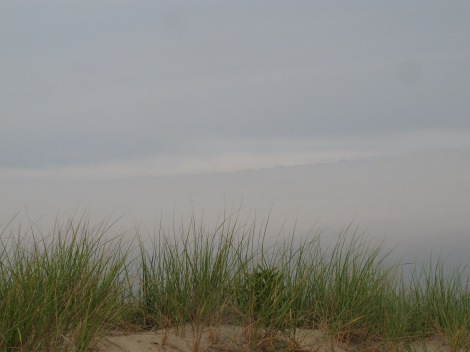 In the time it took to go the five hundred feet to the car, light levels dropped from diffusely bright to darkling charcoal. A wave of looming gray raced overhead. 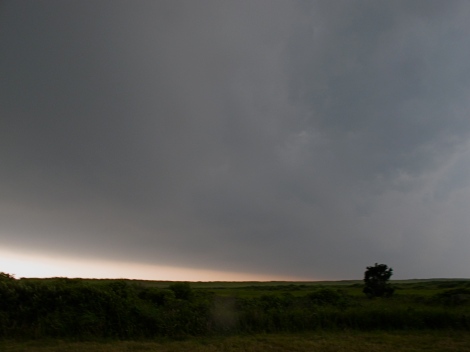 Another roll of cloud came right behind…

We drove the dusty track home, hoping for a good solid rain, to damp down the dust and to give a badly needed drenching to our drying dirt.

No such luck. Most of the storms passed well away from us, except for one that came close enough for us to to see no lighting, but to hear a great rackety-booming.

Later that night we did get an hour or so of gentle rain from the edges of another storm that passed mostly to our north. NOAA says we received between a “trace” and a tenth of an inch of rain. That’s how much water is in the straight-sided bucket that we use for a rain gauge.

Maybe that will bring on some rain?

2 responses to “Stormy Clouds Passing Through”