In Aleatoryland, or the second “roll” of the electronic dice, random.com’s number came up 1219. The haul of images carrying that number came to six. Same as the first album. Of the six, three are from Costa Rica, one is from Martha’s Vineyard, one is from Cape Cod, and one is from Hingham, Massachusetts. The pictures are presented in chronological order.

Milton’s home and sawmill, Zona Sur, Costa Rica. February, 2009. Notice his truck, under the shed roof at the left of the photo. Vehicles aren’t cheap in CR. The rain and the sun wear hard on finishes. So most people with vehicles keep them under cover, if they possibly can. The second story bump-up room is an unusual touch for houses in this area. To the right, with sunglint on the metal roofing,  is the sawmill. In between house and mill you can see stacks of logs and boards. Sawdust and detritus spill down the slope in front of the mill. Most of Costa Rica is but a few million years old. Llandscapes that young tend to be really slopey. Hang on, slopey. 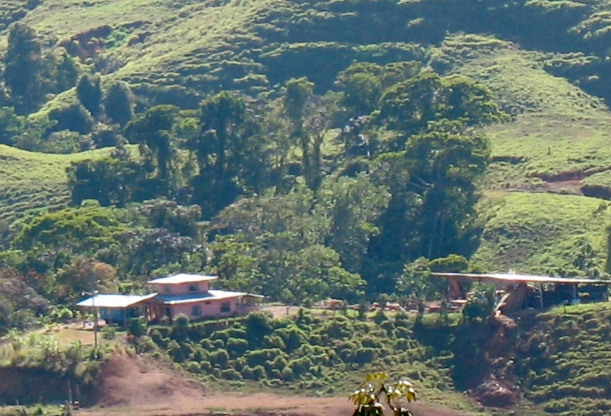 You can’t see it in the picture, but in an area next to the driveway, which is to the left, is a big patch of sugar cane. Lots of the people in the valley have a patch of cane on their homesteads.

Next: Costa Rican palm leaves against a February 2010 sky. These palms are located along a road between a house and a bodega. Their ever-changing overlapping patterns, as they move, either from the wind or from your changing viewpoint, as you move by them, are aleatory delights. 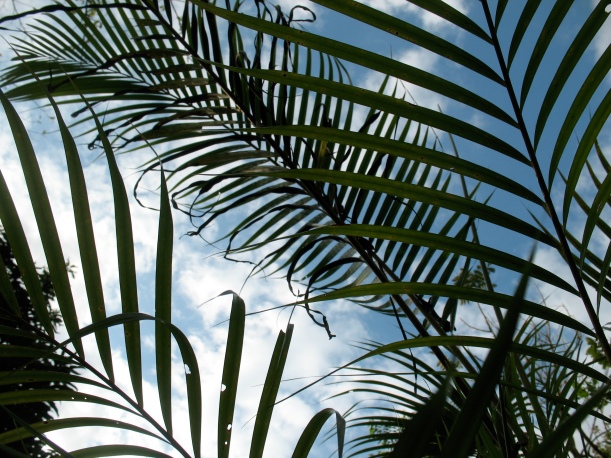 One of the remarkable things about palm leaves is how incredibly strong the center ribs are.

From a trip to South Beach, an image of the beach pea. You can read more extensively about the beach pea in the tompostpile article titled “Po’ Lathyrus”. (Which see…) 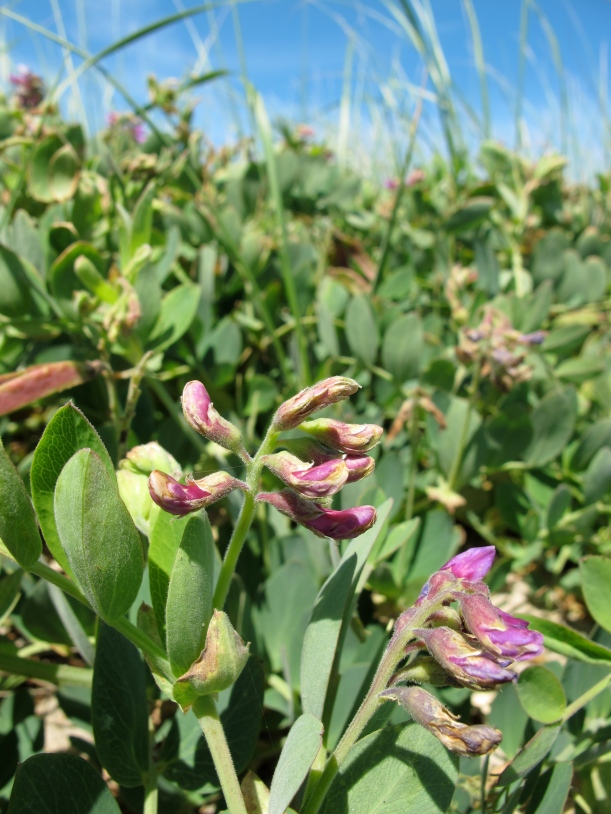 The ArtiPlast storefront, Costa Rica. February, 2011. Plastics specialist store. Their motto, translated, is: “The best selection and the best prices for plastic items”. “Bolsas Express”, or: “Bags Express”  indicates that speedy delivery may be available if you happen to run out of bags at your store. . “Ventas al por mayor” means “wholesale”. “Por menor” would be “retail”. The rip on the side panel exposes the older construction, and takes your eye to the snaky electrical service feed wire. Costa Rican wiring can be rather casual. The topic of Costa Rican wiring is worth a post by itself. One of these days……

Costa Ricans do not have the restrained color sense one sees in New England. Think of the six allowable door colors on Nantucket, or the Black on White or White on Black ONLY that you find in a certain Connecticut town.

Infant wedding party guest, October, 2011. That’s my camera strap in the foreground. The only reason this photo is still in the computer is that the bad pictures from that day have not yet been weeded out of the photo files. Although there’s a charming weirdness to this image. Maybe it won’t get tossed.

There’s no denying the beautiful miracle of a newly-made human.

If you ever take the ferry from Boston to Hingham or vice versa, you get to travel underneath this bridge.   It’s known as the Long Island Causeway, and connects Long Island with Moon Island, and the mainland. You have to pass through a police guardhouse to gain access. Long Island has a history far too extensive to mention here. Check it out on wiki if you so desire.

Thanks for visiting this aleatory.